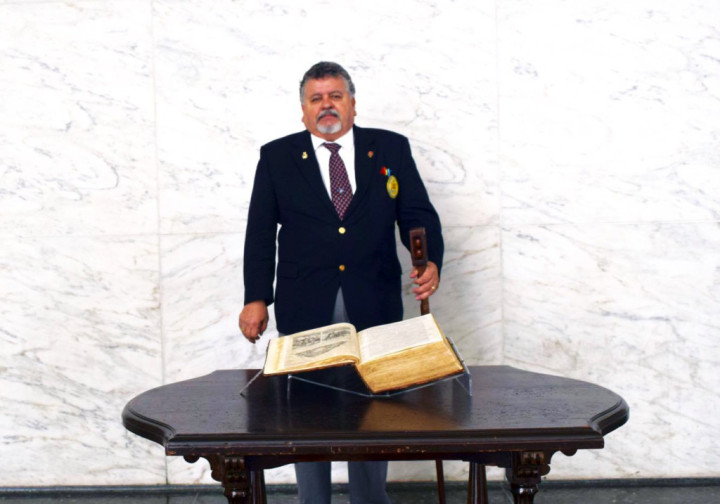 Most Worshipful Michael P. Baker Sr., Grand Master of Masons in Hawaii recently attended the 2015 World Conference of Regular Grand Lodges in San Fransisco, California. While attending the World Conference, the Grand Master was able to view the historic George Washington Masonic Bible, which was used to inaugurate Brother George Washington as President of the United States of America. Please read below for a comprehensive description of this extraordinary piece of American history..

“On March 8th 1770, St. John’s Masonic Lodge suffered a catastrophic fire at its old Lodge room at Scotch Street. In addition to losing its earliest records and Lodge furnishings, the original Lodge Bible was destroyed in the conflagration.

On November 28th, 1770, the Master of the St. John’s, W:. Jonathan Hampton, presented a replacement Bible to the Lodge. At the time, printed Bibles were an expensive rarity and the Lodge was fortunate indeed to benefit from W:. Hampton’s generosity. Scarcely could the Brethren of the time have predicted that within a few short years the Colonies were to sever their ties with their mother country and the Bible was to become the very cornerstone of a new nation founded upon the Masonic principles of liberty and equality.

The Bible was printed by Mark Baskett, printer ny Royal Appointment to the King’s Most Excellent Majesty, London 1767. The deep gold lettering, distinctly clear on both covers, displays this inscription:

The Bible is the King James Version, complete with the Apocrypha and elaborately supplemented with the historical, astronomical and legal data of that period. It contains numerous artistic steel engravings portraying Biblical narratives from designs and paintings by old masters and engraved by the celebrated English artist, John Stuart.

On a platform erected for the purpose, in front of the then City Hall, were gathered the Congress of the United States, with George Wash­ington and Chancellor Livingston, Grand Master of Masons in the State of New York. In front of them was an immense concourse of citizens. It was indeed a great holiday occasion; the Revolutionary War was over and peace reigned throughout the country.

Everything was ready for the administration of the oath of office to the President of the new government, when it was discovered that a Holy Bible had not been provided on which the President-Elect could swear allegiance to the Constitution. Jacob Morton, who was Marshal of the parade, and at that time Master of St. John’s Lodge, was standing close by. Seeing the dilemma they were in, he remarked that he could get the altar Bible of St. John’s Lodge, which met at the Old Coffee House on the corner of Water and Wall Streets. Chancellor Livingston begged him to do so. The Bible was brought, and the ceremony proceeded. The stately Washington took his oath with his right hand resting on the Bible which had been opened to Genesis XLIX and L. His head bowed in a reverential manner, he added in a clear and distinct voice, “I swear, so help me God!” then bowing over this magnificent Bible, he reverently kissed it, whereupon Chancellor Livingston exclaimed in a ringing voice, “Long live George Wash­ington, President of the United States!”

To preserve the memory of this auspicious event, a page was inserted in the Bible with the following inscription:

“On this sacred volume, on the 30th day of April, A. L. 5789, in the City of New York, was administered to George Washington, the first president of the United States of America, the oath to support the Constitution of the United States. This important ceremony was performed by the Most Worshipful Grand Master of Free and Accepted Masons of the State of New York, the Honorable Robert R. Livingston, Chancellor of the State.

Fame stretched her wings and with her trumpet blew.
Great Washington is near. What praise is due?
What title shall he have? She paused, and said
‘Not one – his name alone strikes every title dead.”

The Bible has since been used at four other inaugurations: President Harding in 1921; President Eisenhower in 1953; President Jimmy Carter in 1977 and President George Bush Sr. in 1989. It was also to have been used for the inauguration of George W. Bush in 2001, but rain prevented its use. It has also been present at numerous public and Masonic occasions, including Washington’s funeral procession in New York, December 31st, 1799; the introduction of Croton water into New York City, October 14th, 1840; the dedication of the Masonic Temple in Boston, June 24th, 1867, and of that in Philadelphia on May 24th, 1869; the dedication of the Washington monument in Washington, February 21st, 1885 and its rededication in 1998; and the laying of the cornerstone of the Masonic Home at Utica on May 21st, 1891.

It was also used at the opening of the present Masonic Hall in New York on September 18, 1909, when St. John’s Lodge held the first meeting, and conferred the first Third Degree, in the newly completed Temple. More recently it featured at the World Fair in New York, has been displayed at the CIA Offices outside Washington D.C., and at the Famous Fathers & Sons exhibition at the George Bush Memorial Library outside Dallas, Texas in 2001.

The Bible is still in active use by the Lodge. When not being used by St. John’s Lodge or on tour, it is on display at Federal Hall, Wall Street, New York.”